It is not a novel idea that a lot of good mysteries are full of red herrings. A clue, a distraction, something that seems pertinent but is, in fact, a dead end.


But what if we're not talking about an end or a herring but an earring? A red earring. Welcome to what I'm calling:  "The Case of the Vanishing Earrings."

No, you're not hearing that wrong. The most recent earring that went missing is the third one in less than 2 months! 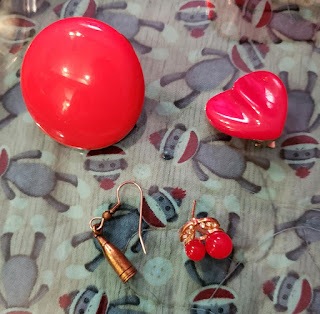 Like most heroines in a mystery tale, I had no idea anything was amiss until the something that went missing was too mysterious to ignore. I bought 3 sets of earrings at a street fair. I'm sure I had both pairs because I admired each of them in the mirror on my way home (I wasn't driving). Once home I walked from the garage to the kitchen and set the goods on the counter.  '

A few minutes later when I went to wash up the treasures, there was ONLY ONE RED EARRING!

Frantic searching ensued. Even Hubby Hartman got involves (since the possible places it could have been dropped orgotten stuck were his car and the garage, over which he felt particularly territorial)

If any shenanigans were going on there, he was sure he'd discover it.

Nothing. Son joined the search. Dogs were brought in. 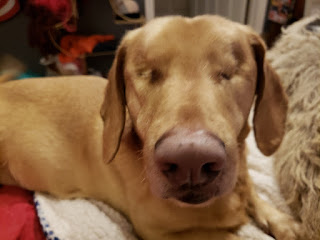 (They are not helpful but we'd put them in the yard while we searched so they wouldn't be under foot.)

In the ensuing weeks (yes, weeks!) we've moved furniture. We've gone through the car. We've swept the garage (and the kitchen - I hope that goes without saying but in case you were going to suggest it, it's been done). Not a trace!

It wasn't until last week when I finally decided to put the other new earrings away (did I think the lost earring would be like a lost calf and return to the herd?) that I realized this is the third earring that's gone missing this summer! And all of them RED.

Now before you assume it's just lost in a sea of vintage fabulousness that you imagine Helen lives in, let me show you how I store my vintage treasures:


Three red earrings. If other earrings have gone missing I readily admit I'm to blame but those have almost all gone missing as a pair (left in an old purse or tossed in the glove compartment or set down at work). But these? I suspect spirits afoot (do spirits have feet? I don't think they have ears but that's what they're purloining so there ya go).

Many people believe that bringing other people's prized possessions into your home is literally inviting trouble. I'd think we'd have that covered since one of my obsessions are collecting vintage these:

I suspect a kindred spirit, in more ways than one, with a love of red shiny things is pilfering pretties around here. Am of half a mind (I could end that sentence right there most days, which only muddies the waters when things get misplaced) to get another pair of red ear bobs and see what happens.


What do you think? Mischievous spirit? Sloppy housekeeping? Silly slip up by a distracted diva? Whatever it is, something fishy is going on at Auntie Helen's house and that's no red herring! 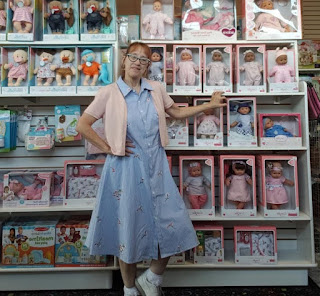